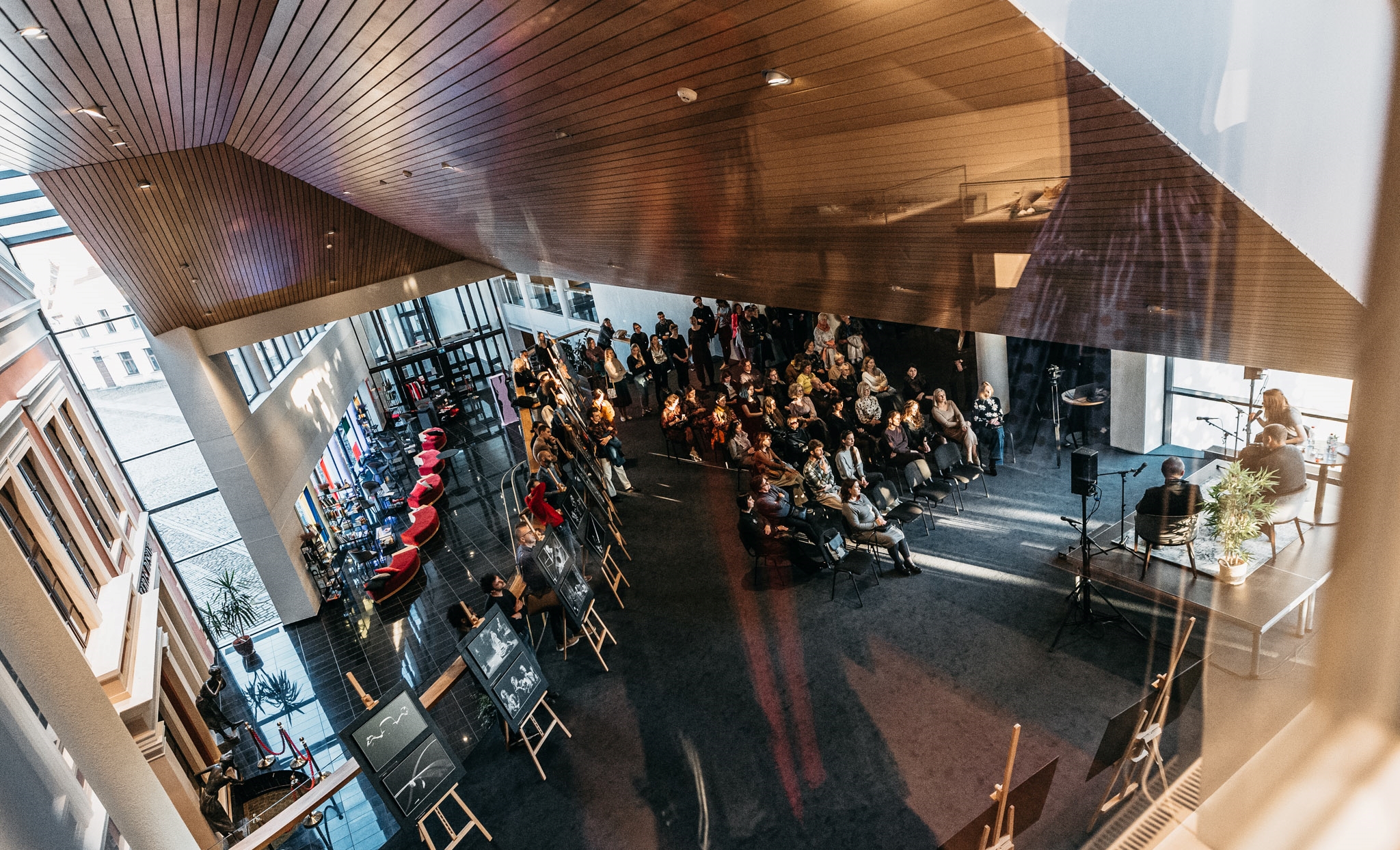 On May 31 excitement at Klaipėda Drama Theatre was felt in the air – the second part of the international theatre festival “TheATRIUM” programme was about to start. In store for the audience were four performances by some of Europe’s most prominent directors. The first one in the programme was an Italian director Alessandro Serra with his latest production “The Tempest” by W. Shakespeare, who last year left a lasting impression on Lithuanian audience with his other production.

W. Shakespeare “The Tempest” is full of magic – it is a story of Prospero living with his daughter on an uninhibited island. He controls the powers of nature and wants revenge for his foes, who have robbed him of the duchy of Milan, and one of whom is his own brother.

“In “The Tempest” everyone seeks to seize, consolidate or increase their power”, – says A. Serra, describing the mechanism behind winding up the action of the performance. According to the director, for a while he has wanted to stage a performance about power and stage. When he began working with “The Tempest”, he thought that this desire of his might get postponed, although while translating the Shakespeare text into Italian and adapting it for the play, he understood that “The Tempest” perfectly resonates with the ideas he was lately obsessed with, “I felt an immense political power, which nowadays seems even more crucial, since wars are always fratricidal. This land is my land! I was the first one here! Palestine, Ukraine, the whole world, every wall, a fence of the block house…”

This work by Shakespeare is an attempt of the famous playwright to reflect on art and theatre. This was also highly important to A. Serra. “The Tempest” is an ode to the theatre, performed by the theatre, – said the Italian director about the production based on one of the most mature works of Shakespeare. – Its magical powers lie precisely in this unique and one-time opportunity to experience metaphysical dimensions thanks to a company of boorish comedians treading wooden floorboards, making do with just a few props and a handful of patched up costumes. Therein lies its age-old fascination: everything happens before our eyes, everything is real and yet so clearly simulated, but, above all, this superhuman power only occurs if an audience is willing to listen and see, imagine, and share the silence to create the ritual. People will always have a longing for the Theatre because it remains the only place where human beings can exercise their right to an act of magic.

Last year because of the pandemic restrictions everyone wishing to attend “Macbeth” by A. Serra, that has become a “TheATRIUM” legend, could not fit in the auditorium due to the visitor restriction policy. This time for all the theatre lovers to enjoy “The Tempest” it was shown twice, on May 31 and June 1. On May 31 right after the performance A. Serra met with the audience – the director had an open conversation with Klaipėda Drama Theatre artistic director, poet and playwright Gintaras Grajauskas.

June 9 will give the guests of TheATRIUM a chance to make a new astonishing acquaintance. A first-time visitor in Lithuania, “Song of The Goat Theatre” is well-known in Europe for its’ unique style of interweaving musical traditions of various nations into the performances. Audience in Klaipėda will see “Andronicus-Synecdoche”, a performance by the director Grzegorz Bral, one of the founders of this theatre, a production based on pretty rarely staged and one of the most brutal Shakespeare tragedies.
It tells a story of a Roman general Titus Andronicus returning from the battles with the Goths and bringing along as prisoners the queen of Goths and her family. Titus sacrifices one of the prisoners, thus getting caught in a destructive vicious circle of bloody revenge against him and his loved ones. “This drama is very interesting, mostly because it is among the first ones, or probably even the very first highly bloodthirsty Shakespeare drama. The bloodiest one. It contains the greatest amount of dead bodies, revenge, violence and many other things that will later appear in his other dramas, such as “King Lyre”, “Macbeth”, “Hamlet”, “Romeo and Juliette” in a more mature form”, – G. Bral told the press about the performance. After the performance both the director and the author of the text adaptation Alicija Bral will meet with the audience during a meeting moderated by the Klaipėda Drama Theatre actress Justina Vanžodytė.

On June 16 a performance directed by Tamara Trunova from The Kyiv State Drama and Comedy Theatre on left bank of Dnipro river, based on the play “Bad Roads” by Tamara Vorozhbit will take place. N. Vorozhbit wrote this play after Russian invasion in Ukraine in 2014, building it on her own experience in Eastern Ukraine and the evidence by real witnesses. The main character travels to Donbas in search for documentary material, meeting victims and butchers, witnessing their shattering lives.
“Theatre is fed by the world problems. Today we are no longer talking of the presence or the absence of pain. We are talking about the degree of it. We watch different means of survival, of starting a dialogue with the new world. The performance focuses on the man in the middle and tries to analyse the borders of personal freedom and sovereignty during the war”, – says the director T. Trunova about the performance. After the performance the director and the artistic director of the Kyiv State Drama and Comedy Theatre on left bank of Dnipro river Stas Zhirkov will meet with the audience and get interviewed by the actor Artūras Lepiochinas.

“TheATRIUM” will end with the showings of Oskaras Koršunovas “Uncle Vania” based on A. Chekhov on June 21 and 22. This performance was produced in collaboration with two of probably the most important Catalan theatre institutions – “Temporada Alta” festival and the “Teatre Lliure”. Organizers of the festival have specifically asked for a performance based on A. Chekhov, so O. Koršunovas has decided to bring to live “Uncle Vania”.
Chekhov reflects the inner apocalypse of a handful of human destinies: boredom, wasted life, unrequited love or endless work mark the existence of the characters in one of the author’s most bleak and representative works. “This is not Russia, but also not Catalonia. This isn’t the 19th century, but also not the present. This world lies on our spiritual map. “Uncle Vania” is surprisingly, oddly contemporary – topics of ecology, female emancipation, the clash of the modern and traditional worlds, social structure, in which love becomes impossible. Echo of all these topics can be heard in our performance, but to us the most important aspect was the spiritual map painted by Chekhov, the one where we keep searching for ourselves. To me “Uncle Vania” is a mirror, where I recognize myself. An eerie mirror of my spiritual reality”, – says O. Koršunovas about the performance.

After the performance on June 21 the director and the famous Spanish actor Julio Manrique, playing the lead role, will meet with the audience and give an interview to the actress Eglė Jackaitė.